The Truth About Bluetooth MIDI

The Truth About Bluetooth MIDI 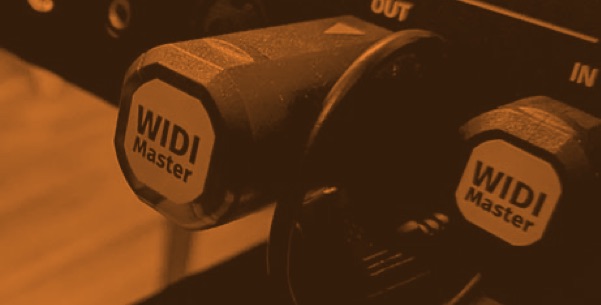 Bluetooth MIDI? What about latency?

Many people (including engineers) who did not try Bluetooth MIDI assume a lot of things about latency with MIDI over Bluetooth. MIDI is a serial based protocol that has been developed in the early 80s. It is not amazingly fast to begin with.

Bluetooth has been rapidly developing over the last decade. It handles a few megabits per seconds easily. That is why it is easy to say that MIDI over Bluetooth is capable of offering a professional low latency solution for musicians and producers. Both on stage and in the studio.

It is even more easy to say this as a manufacturer. Feel welcome to watch this 2 minute video by Roger Linn. Mr. Linn, the legendary designer behind the LM-1, MPC and LinnDrum, talks about WIDI Master and his MPE-based Linnstrument by Roger Linn Design.

Please note, this is not a paid endorsement. Neither did any member of the CME team asked Roger to create this video. He just bought it. Liked it. And shared it.

Before we go into details and more sophisticated matters, let's address some main ideas about BLE MIDI (Bluetooth MIDI).

A tiny word on MIDI terminology

As you might know, the history of MIDI technology incorporates widely used terms as master and slave. Although the term master is not causing any real issue, the word slave can trigger undesired feelings and emotions to a large group of people.

Following requests from the Community of MIDI Enthusiasts, it is intended to change the terminology to a more modern form of communication.

As the previously used MIDI terminology trivialise something quite horrendous associated with institutional racism and colonisation, the purpose is to no longer use the term slave. Although this might be a bit confusing to you in the beginning, it only takes a short while to adjust. Read this article for a better understanding.

Let’s return to the fun part. Let’s talk about BLE MIDI and of course…..latency!

Latency is just a number…

There are a lot of claims being made about latency and especially the ability of being able to really notice it as a human. Let alone link it to a specific part of your system. There are musicians who play their instruments based upon the limitations of that device. Latency can be just one of them. Therewith it becomes part of the deal.

Of course, latency is an important metric when it comes to music production and performance. Latency for Bluetooth MIDI does not stand upon itself. It depends on the environment and the connected devices.

As with Roger Linn, one of the other early adopters of WIDI was the amazing Jean-Michelle Jarre. Again, there has been no request from CME towards JMJ. Nor did we pay him to say a few nice words. He simply bought it. Liked it and reached out to us to congratulate the CME company and its engineers.... 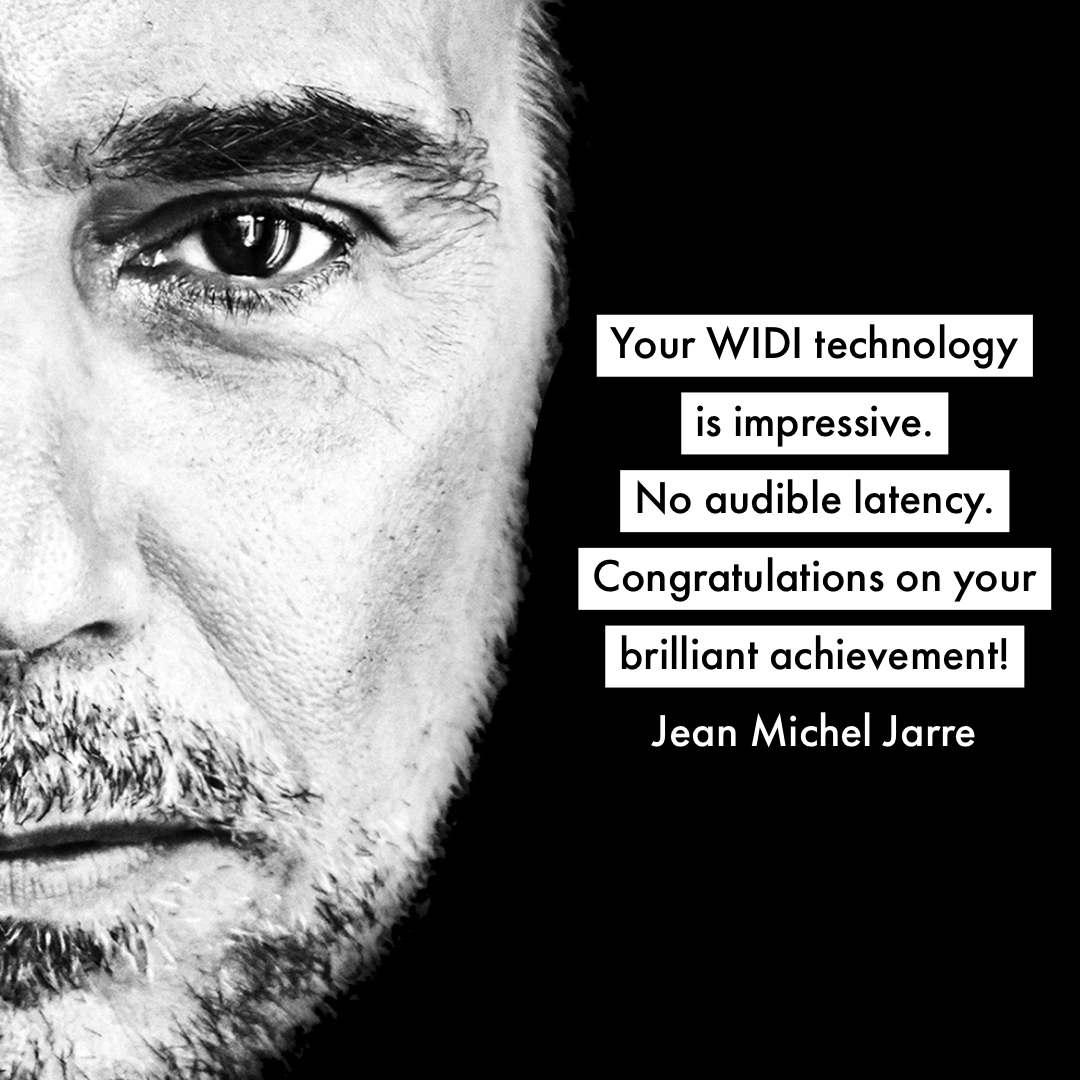 To proceed with the previous paragraph about latency, it is important for a complete understanding to look at the bigger picture.

When you look at your entire system, it is complex for you as a musician or producer to pin-point latency to a specific part of the system. How are you able to say the latency you experience from your monitor speakers are caused by either MIDI communications or audio conversions? Or delays in translation by your operating system?

That is why it is best to keep this simple and not get stuck in one single metric. With Bluetooth MIDI, the latency metric is not a given in every situation. It is not one solid number. The performance depends on multiple factors. That is why, you should be careful with reading a metric from a page and assuming it says it all.

That is why it is recommended to try it yourself. Experience the performance with different setups in different environments. Following you can make your own decision based on real life experiences.

Another important factor is jitter. It is more or less the variation in latency. In the end, a proper musician can play with a stable latency. That is why jitter is also a very important metric. Especially when it comes to real time MIDI clock and sync purposes.

Our engineers are constantly working to improve WIDI's firmware and especially the jitter performance. WIDI uses a collection of smart algorithms to select the best performing frequency at a given distance between devices. This is what is called Adaptive Frequency Hopping. In short, WIDI is able to switch frequencies to keep delivering the best performance.

The difference between a MIDI cable and BLE MIDI

First of all, with Bluetooth MIDI latency is always a bit higher compared to a regular MIDI cable.

That said, you can question yourself if you would be able to distinguish WIDI Master from a standard MIDI cable in a double blind test. We have noticed that this will always lead to the same discussion about latency.

This discussion is quite similar to the one we have had in the start of streaming and the download days involving MP3s and WAV files. Or that one of the supreme quality of vinyl over anything else….it is ongoing, never ending and also very much part of the process of developing innovating technologies. 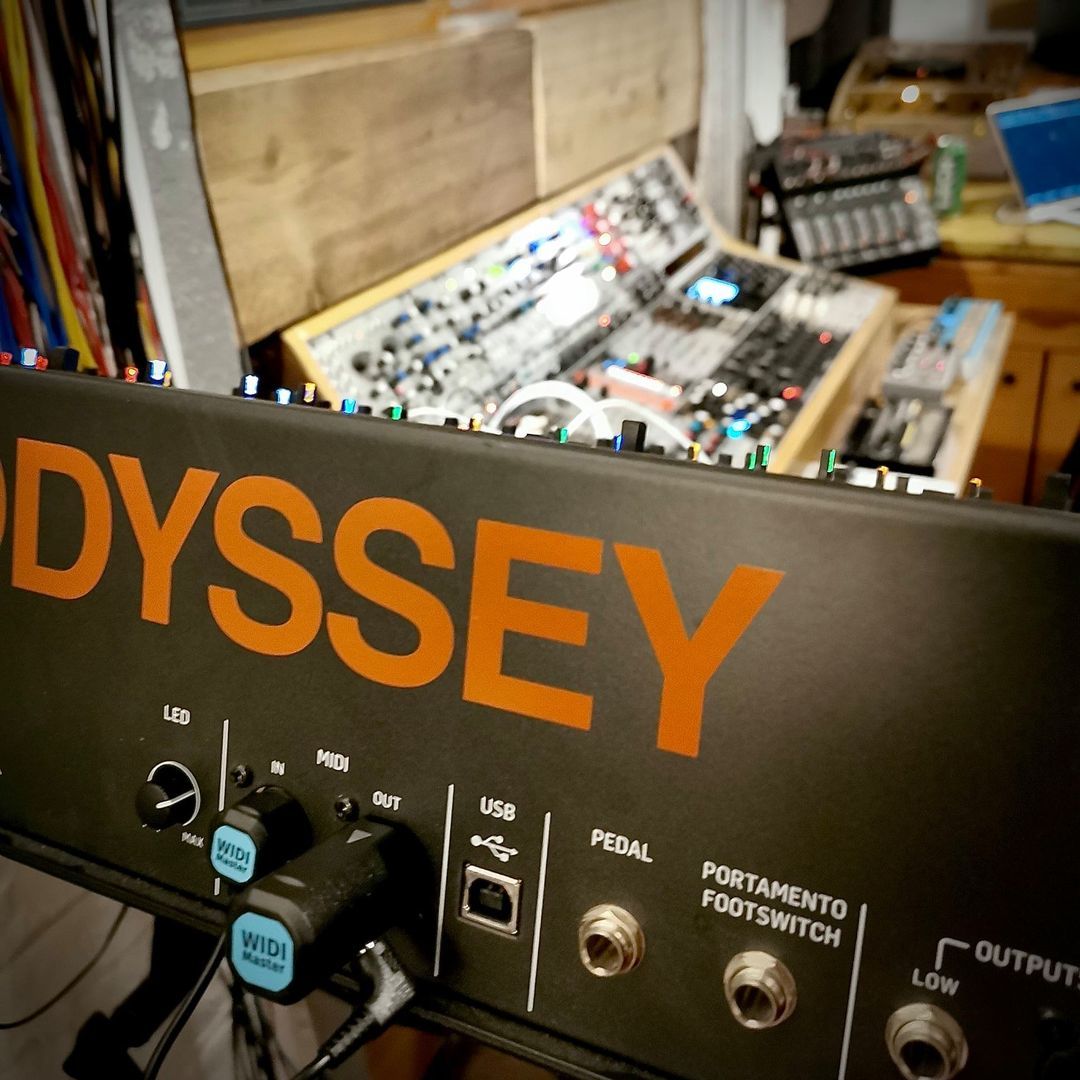 When talking about latency of the WIDI technology you’d have to keep in mind we measure latency by using an oscilloscope. It is measured between two WIDI Masters. The lowest outcome is 3ms. The highest is 10ms. We measure an average on 5ms to 6ms.

The latency on iOS and macOS came from the limitation of the Bluetooth connection interval. This is a rule set by Apple. On iOS it is 11.25ms minimum. On macOS it is 7.5ms minimum.

Please note that these are “intervals” and not “latency” metrics. These intervals can cause latency and jitter due to the limitation of that buffer. 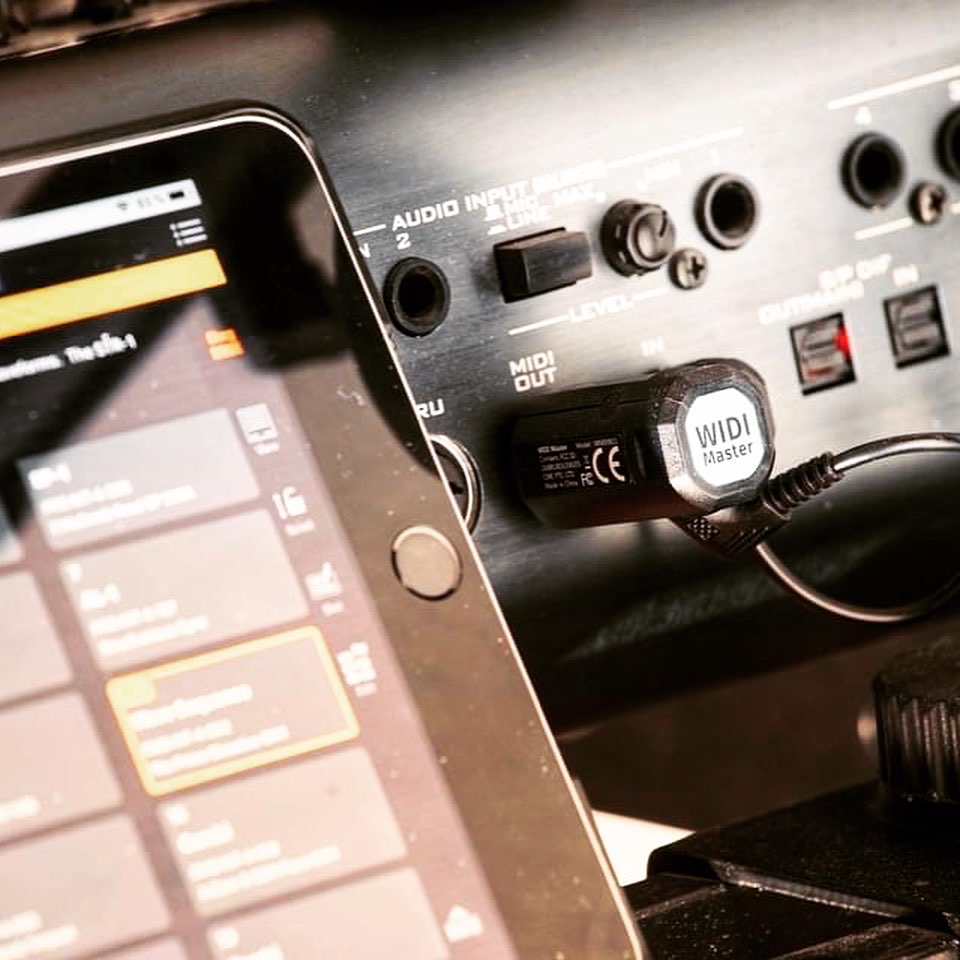 Bypass Limitations of macOS and iOS

The main reason for this limitation is because Apple has no intention to place Bluetooth MIDI at a high priority compared to other more common services. Thus if you connect any Bluetooth MIDI device with iOS or macOS, you cannot get the connection interval lower than above mentioned limitations.

If we break away from the iOS and macOS Bluetooth connection interval, two WIDI Master can set itself with shortest interval that Bluetooth 5 supported. In this way, we can reduce the latency significantly.

Also, in the design of macOS it is integrated to "kill" any unused BLE MIDI connection. It is designed this way, because macOS does not prioritise Bluetooth MIDI. It prioritises Bluetooth for audio and other data. Bluetooth MIDI is simply not that important for Apple...

To bypass limitations of iOS and macOS an interesting option is WIDI Uhost or WIDI Bud Pro. It will also allow you to pair automatically, instead of manually setting your BLE MIDI connection every time.. 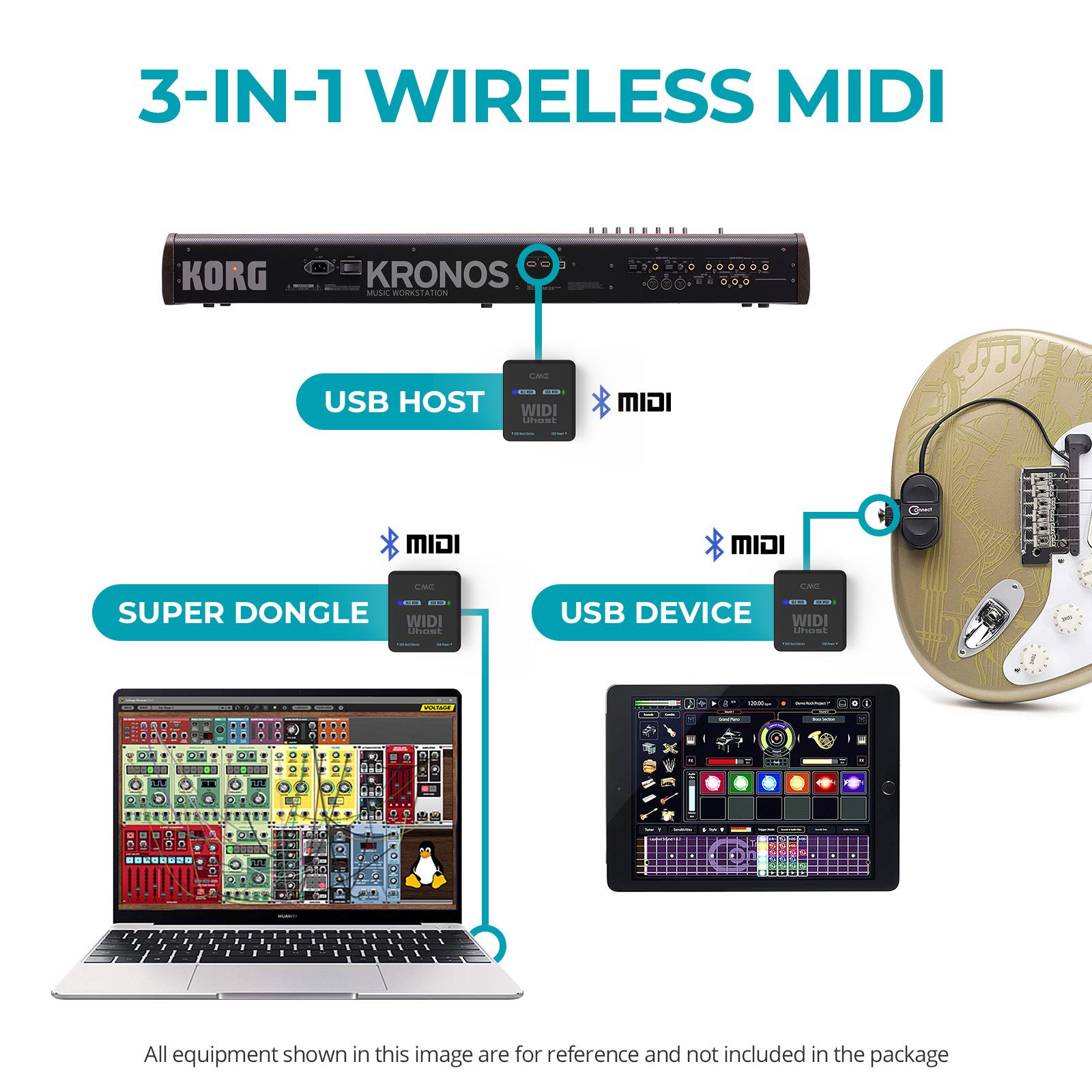 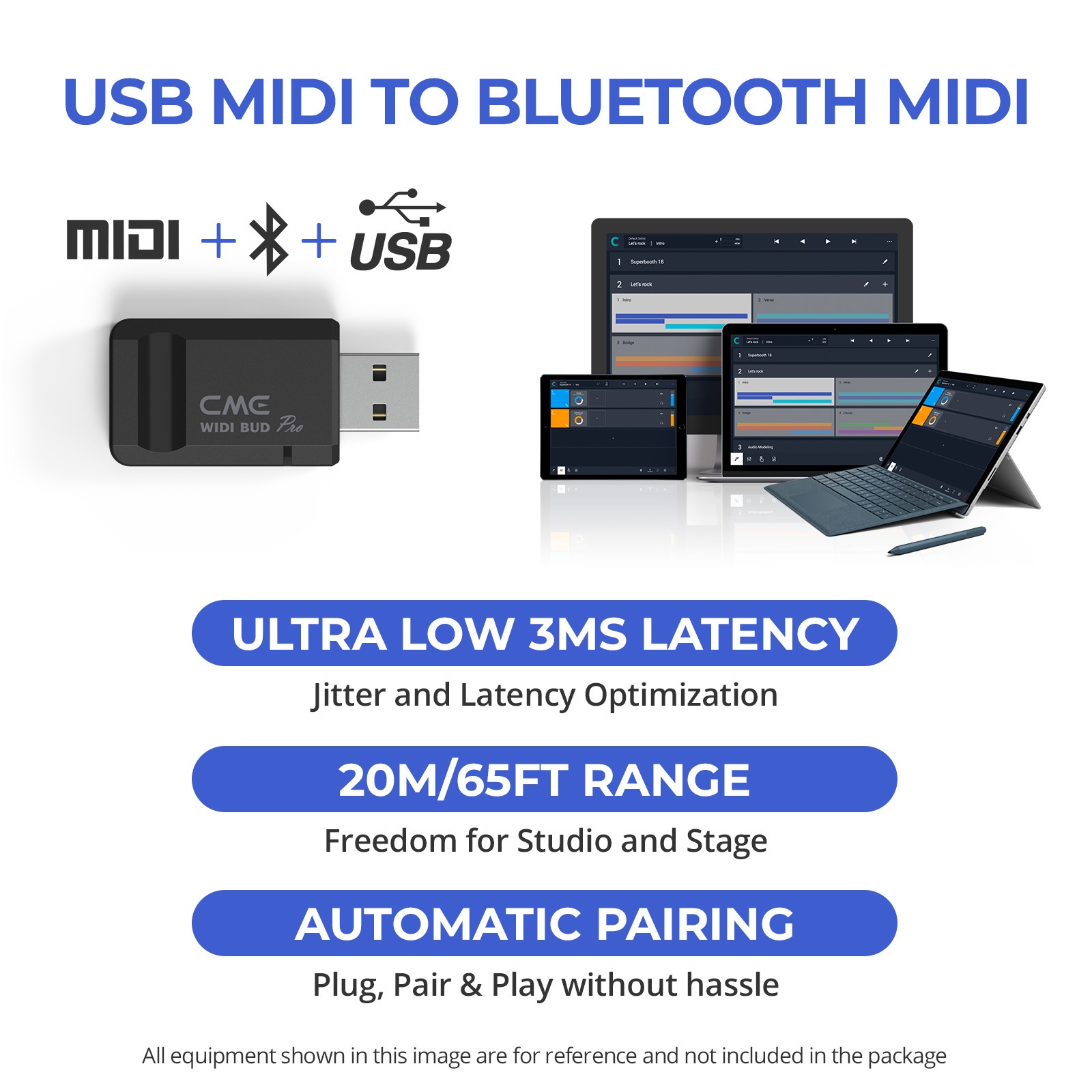 You are perfectly capable of making your own decision. If latency is the only metric you make your decision on, and cables work for you, you just stick to your cables. Or at least wait until you and your musician friends can test our Bluetooth MIDI solution in real life at your local dealer. That is fair enough, right?

In the other hand, if you are interested in getting rid of those cables, advanced midi connectivity, app based cable management and wider range plus freedom of movement with midi (like on stage), then Bluetooth MIDI solutions might be of interest for you.

Take a look at this great video by the amazing Shook and partner Juliet. This time, the videos made by Shook all are advertisements. This means, Shook got paid to create them. And it was worth every single penny!

With the current BLE MIDI solution as developed with CME’s WIDI it is possible to reduce latency between two WIDI devices using BLE 5 to 3ms. When looking at a stable jitter it is considered that a 4–6ms latency is more accurate.

If you want to find out more about WIDI Master and latency: go read this!

Bluetooth MIDI is the standard as developed by Apple and approved by the MIDI Association already 5 years ago. Many industry icons including engineers from Moog, David Smith, Yamaha, Roland, Korg, Apple, Google, Microsoft etc. worked together to verify this standard.

Learn more via the MIDI Association!

There are many professional keyboards and synthesizers already equipped with Bluetooth MIDI features. Tens of thousands professional musicians use it on the stage or in the studio for over several years. If you search on Google, you can find many examples.

Up until this day CME rarely receives complaints by professional musicians about instability of connections and latency. Mainly issues are caused by settings, obstacles and also limitations of MIDI devices and the architecture of operating systems.

That is why, as a fact, MIDI over Bluetooth has already been approved over the time and proven to work by over 4 years of usage.

Let's do another Shook celebration!