Maybe the most powerful BLE-MIDI device at this moment!?

Maybe the most powerful BLE-MIDI device at this moment!? 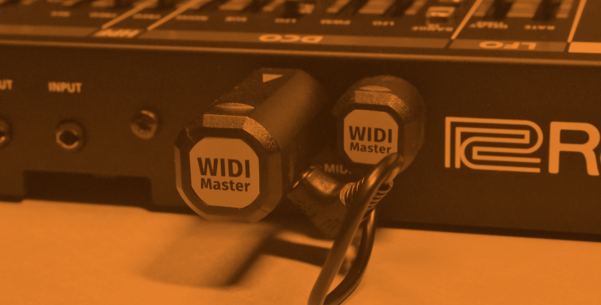 The WIDI Master that automatically pairs with various BLE-MIDI devices is amazing!

Hello there. You are about to read a blog as written by Ken Fujimoto. It is translated into English via Google Translate for international reference. If you understand Japanese (or know how to use Google Translate) this original version by dtmstation.com is for you. Very informative! And an honest overview of the first encounter with WIDI Master.

MIDI over Bluetooth Low Energy (BLE-MIDI) solutions are appearing one after another from different companies. At DTM station we have picked up those devices from all those manufacturers. CME brought their WIDI Master device on the market for US$ 59. It can be used by connecting it to the MIDI terminal of a device such as a synthesizer, electronic piano, rhythm machine, audio interface, etc.

And because it runs on the power supplied from the MIDI terminal, it can be used without a battery, similar to Quicco Sound and YAMAHA.

This is very convenient in its use. It will make your life much easier. In terms of its convenience, it is no exaggeration to say that WIDI Master is the best of the various BLE-MIDI currently available. So let's introduce what the WIDI Master is and how you can use it. 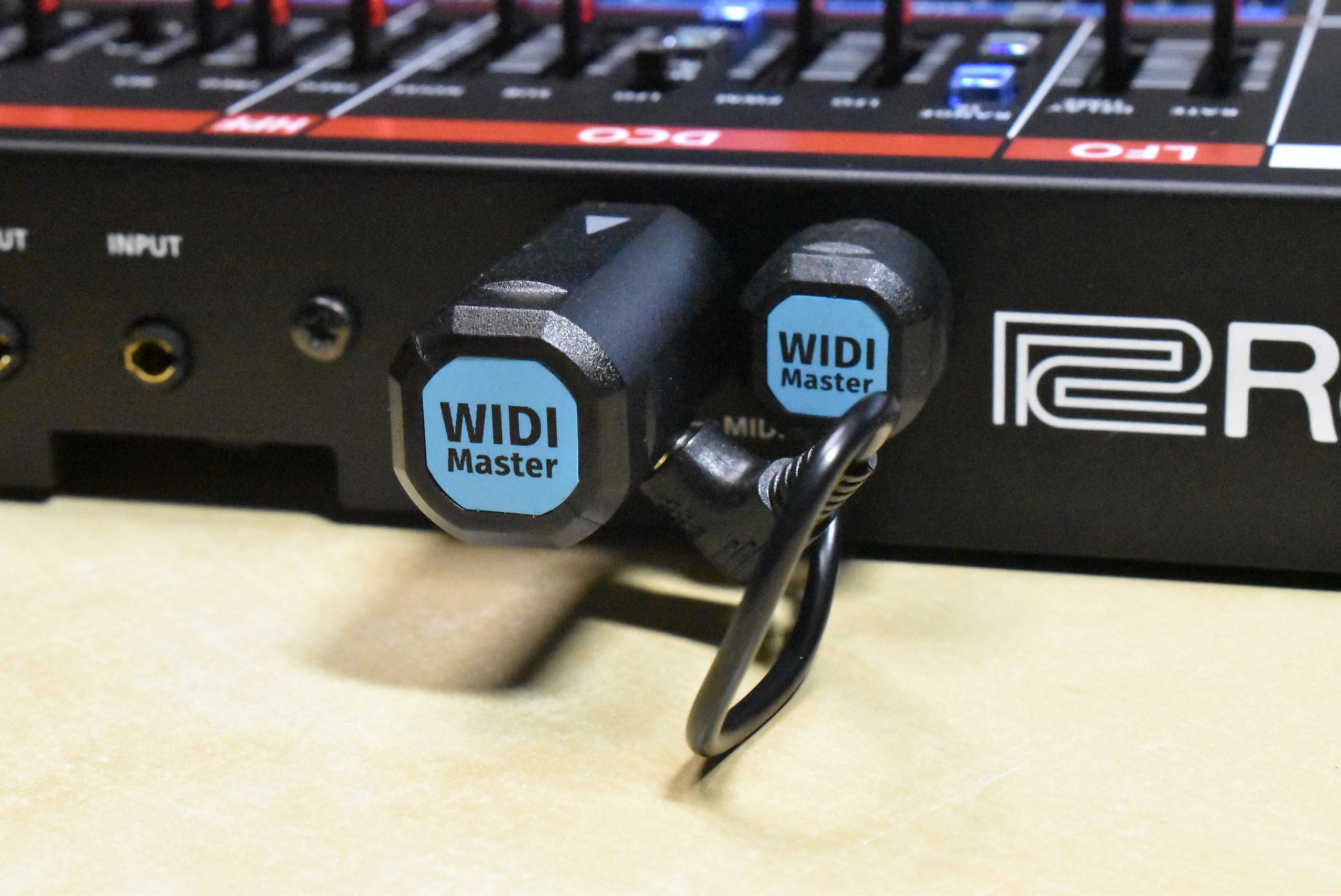 CME is a Singaporean manufacturer with a history of over 15 years in the field of wireless MIDI. It is a manufacturer that has been working on wireless MIDI long before the BLE-MIDI standard was born. And before Bluetooth became popular in the first place. With products like the Xkey, which is widely used as a thin USB keyboard. And Xkey Air, which is equipped with BLE-MIDI.

That said, since the Xkey series is sold to Ringway, it seems that it is currently out of the CME lineup...

(CME says: that is right, we fully focus on WIDI technology now) 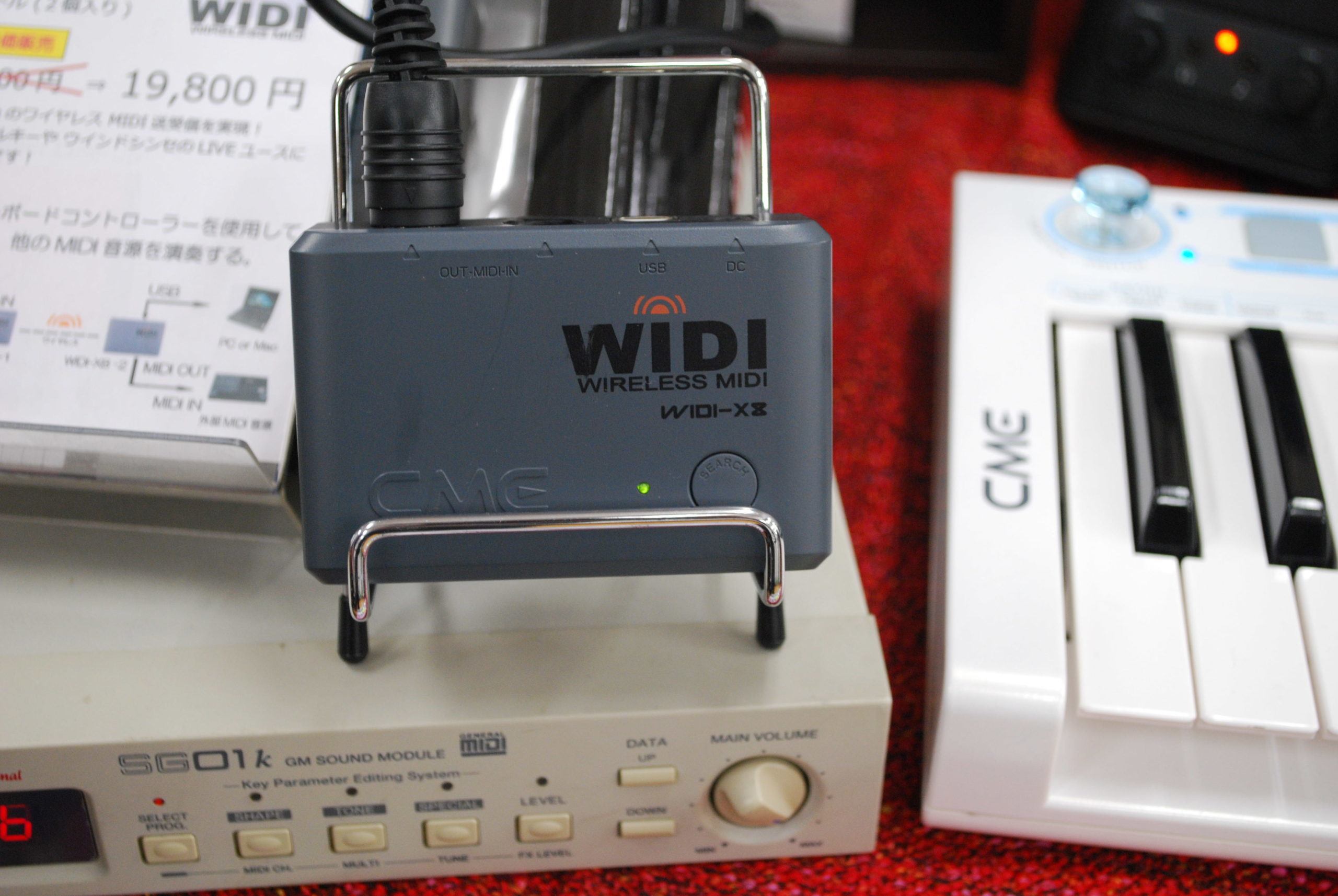 This WIDI Master was released in July 2020 by CME. It's a small dongle-like device that connects to your MIDI IN and MIDI OUT. That said, it's a little different from other companies' products. One of the differences is that the MIDI IN side and MIDI OUT side can be separated. The two jacks are connected with a 2.5mm 3-pole cable. That's it. 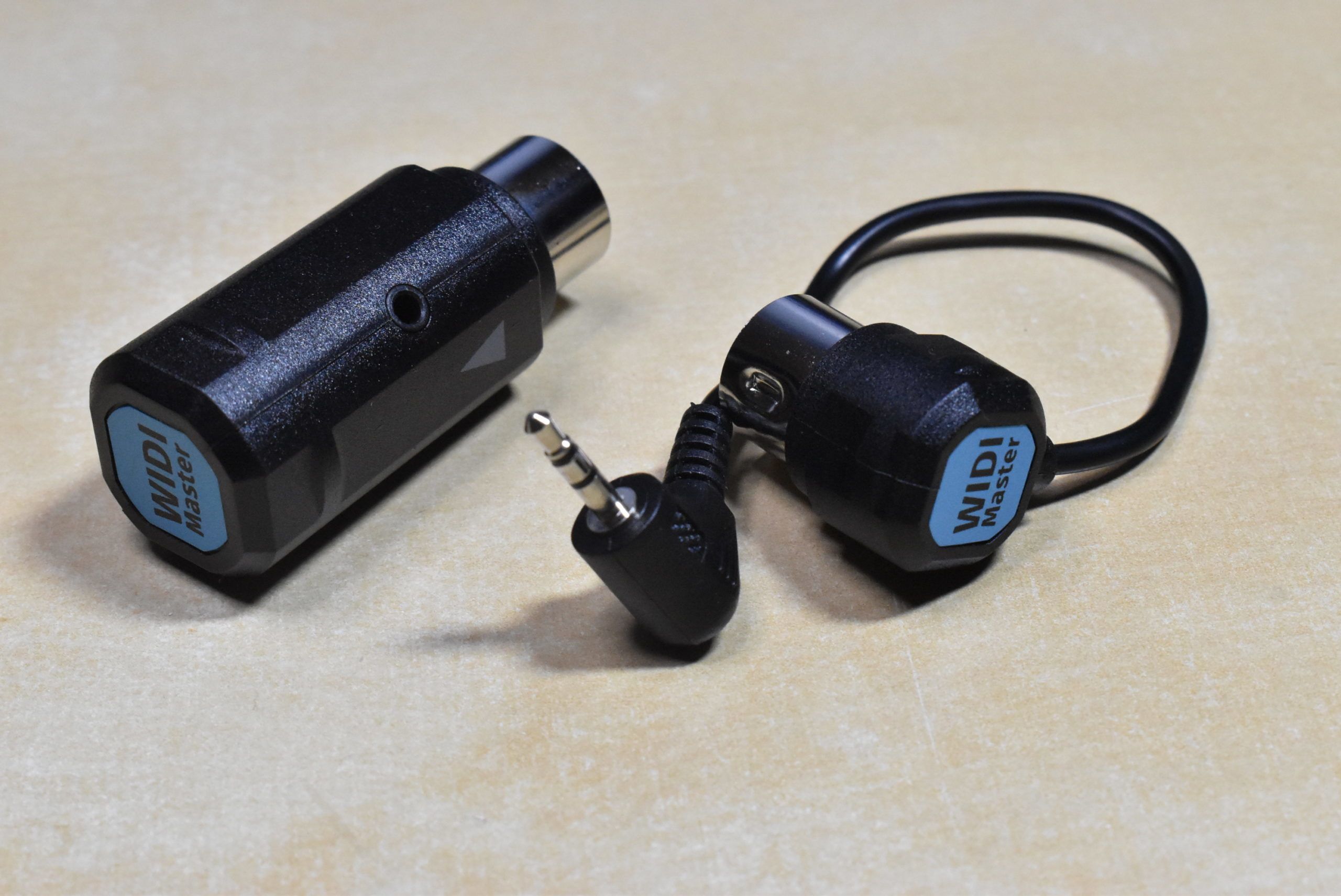 The WIDI Master has separate MIDI IN and MIDI OUT connectors

In the case you use equipment that has only MIDI OUT, this detachable design is great. As you can imagine it tends to be awkward when one of those connectors hangs bungling around. In the case of WIDI Master, you can only use the device that connects to MIDI OUT as a standalone unit. Compared to other companies' products, this is refreshing and it will work very useful for devices like AKAI's EWI. 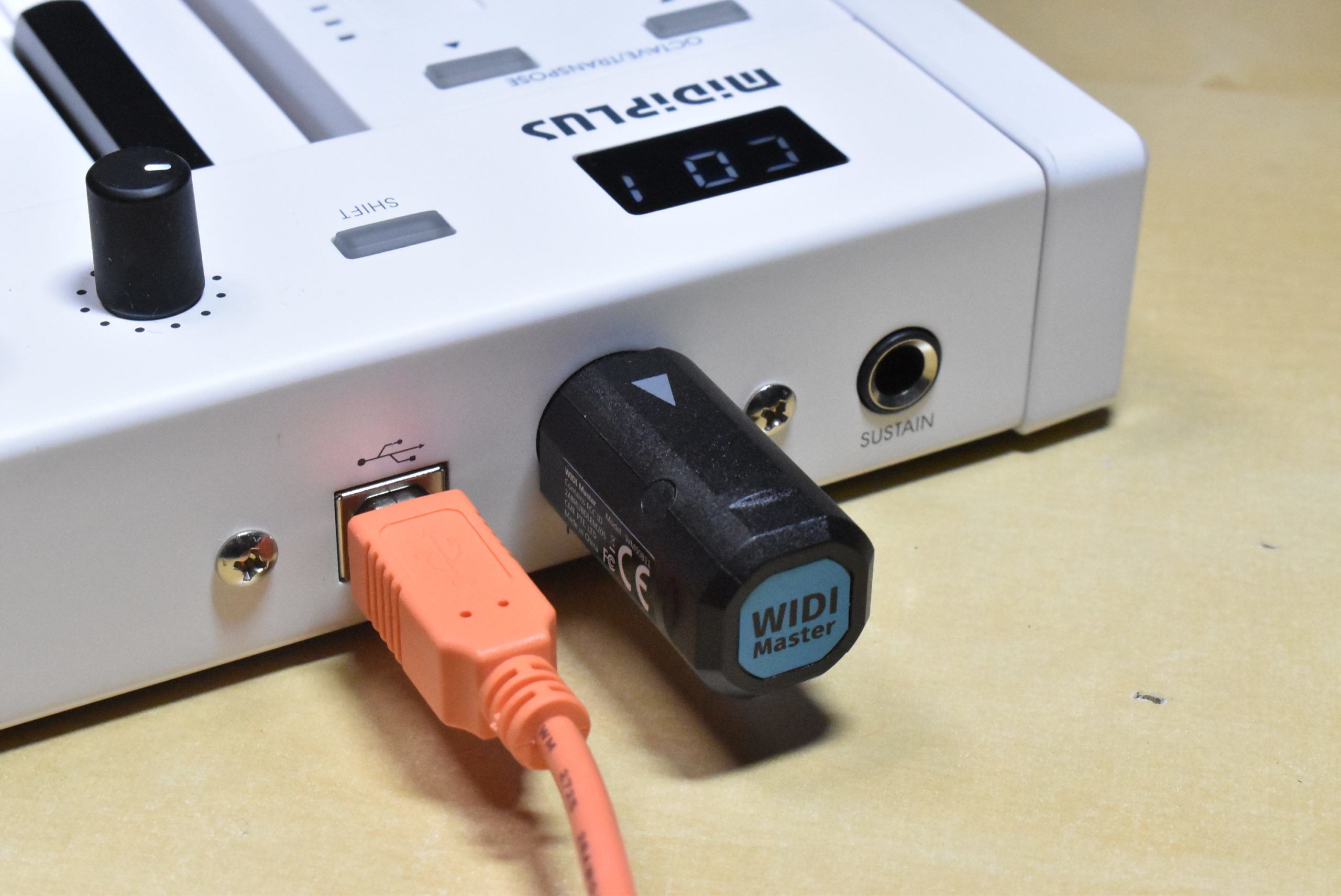 For equipment that has only a MIDI OUT terminal, it is OK to connect only one, so it is very refreshing.

In addition, the side that connects to MIDI IN is smaller. It does not collide with the part where the 2.5 mm terminal is inserted. So even if you use equipment with a narrow distance between the MIDI IN and MIDI OUT terminals, you can connect it without problems.

The lengths for MIDI IN and MIDI OUT are different so that the connections do not collide.

When using WIDI Master, you can work with only one single unit. But if you have two, it seems that direct communication between two MIDI instruments is also possible, without any operating system involved. So I bought two. Without knowing how to pair, I connected one to the Roland Boutique JU-06's MIDI IN / OUT and the other to the YAMAHA's electronic piano MIDI IN / OUT. And attached WIDI Master to each instrument. Next, I turned on the power. 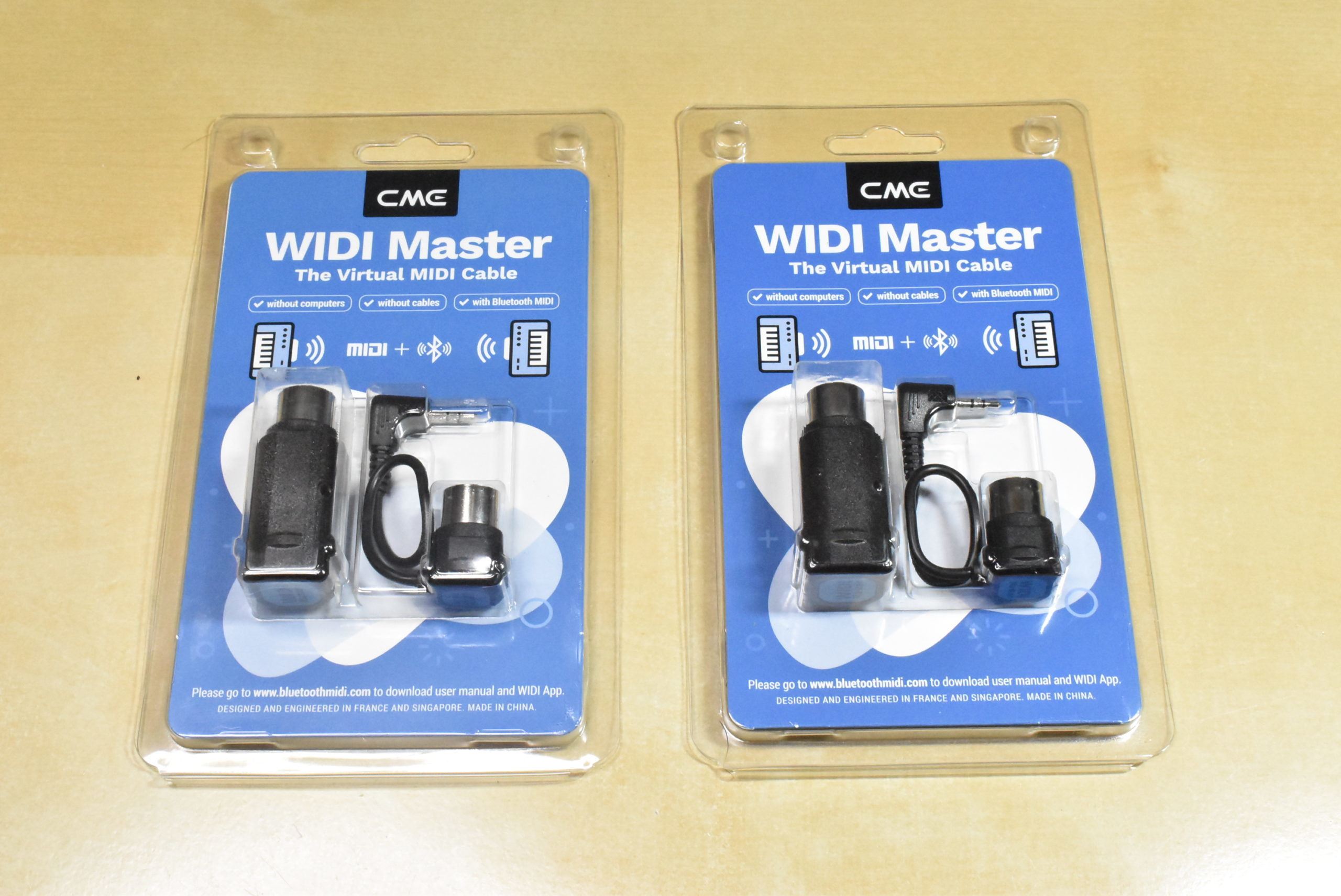 I bought two WIDI Masters this time and tried them 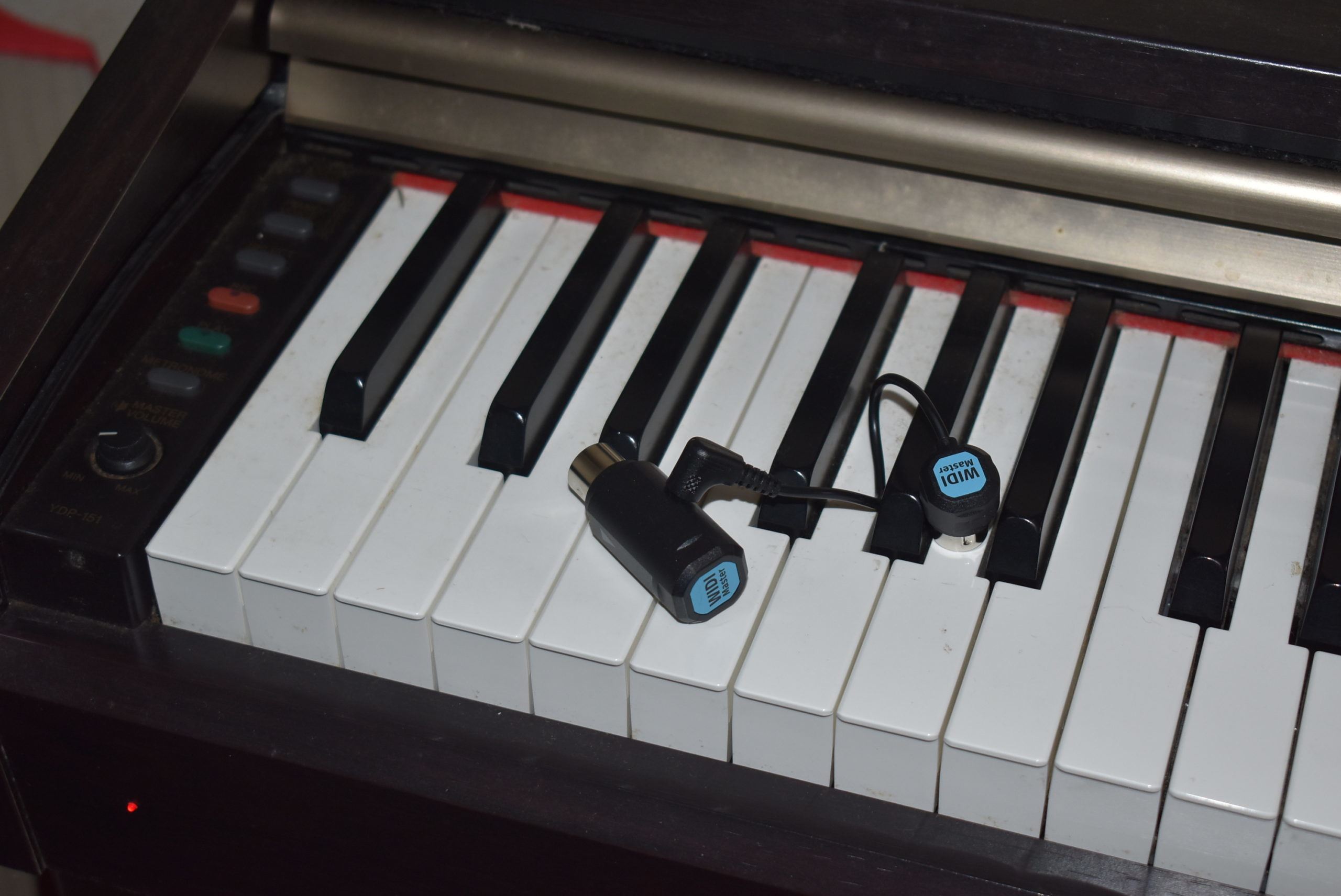 When I connected the WIDI Master to the MIDI terminal of the electronic piano and also connected it to the JU-06, both were automatically connected.

It seems the JU-06 makes the sound. Yes, I it was paired automatically! 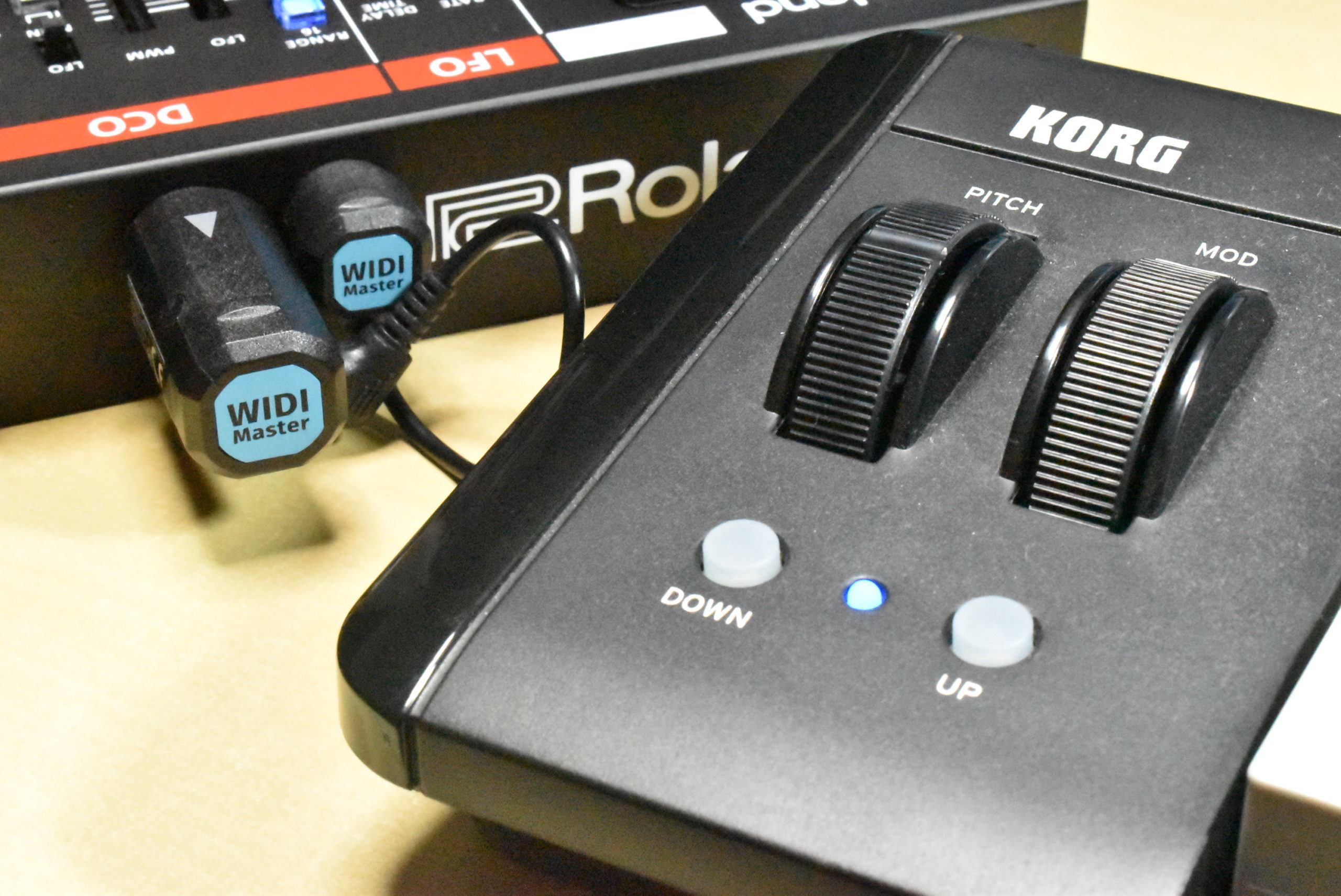 When I turned on the KORG microKEY Air, it was automatically paired with the WIDI Master.

Perhaps it's like WIDI Master finding a nearby BLE-MIDI device and pairing it automatically. Isn't this epic?

(CME says: that is right, soon we will release an app to make it even more convenient to switch between multiple wireless MIDI devices) 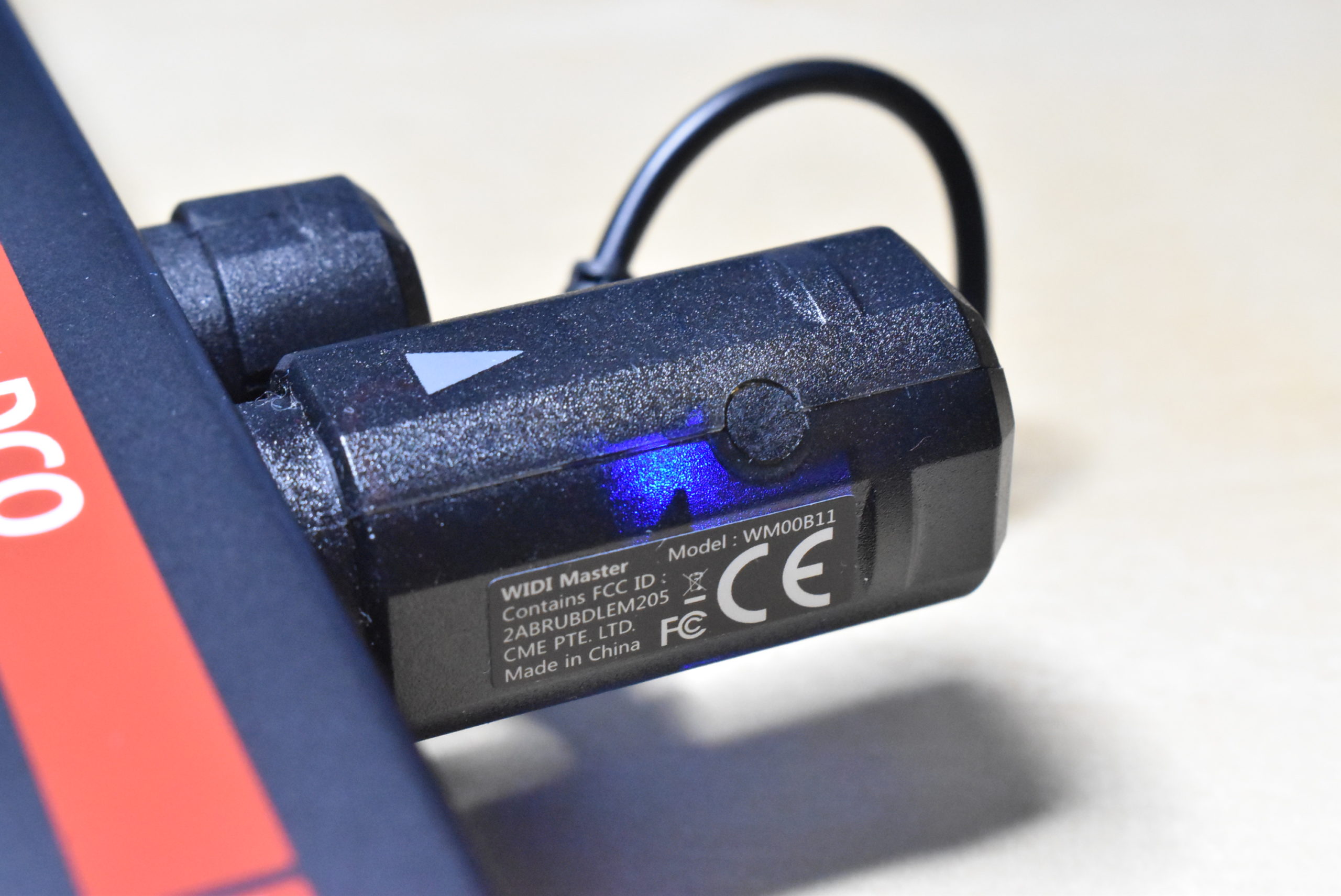 When the connection is established, the blue LED inside the WIDI Master blinks faster.

By the way, when the Bluetooth connection is not established, the blue LED inside the MIDI OUT terminal side of the WIDI Master blinks slowly. However, once the connection is established, you can confirm that it is connected when the LED indicator keeps on consistently or is blinking quickly

So is it possible to connect with BLE-MIDI other than KORG? I tried some. First of all, when I tried pairing WIDI Master with YAMAHA's MD-BT01, it still connects automatically. I also tried the UD-BT01, which converts a USB-MIDI device to BLE-MIDI, it also worked instantly. 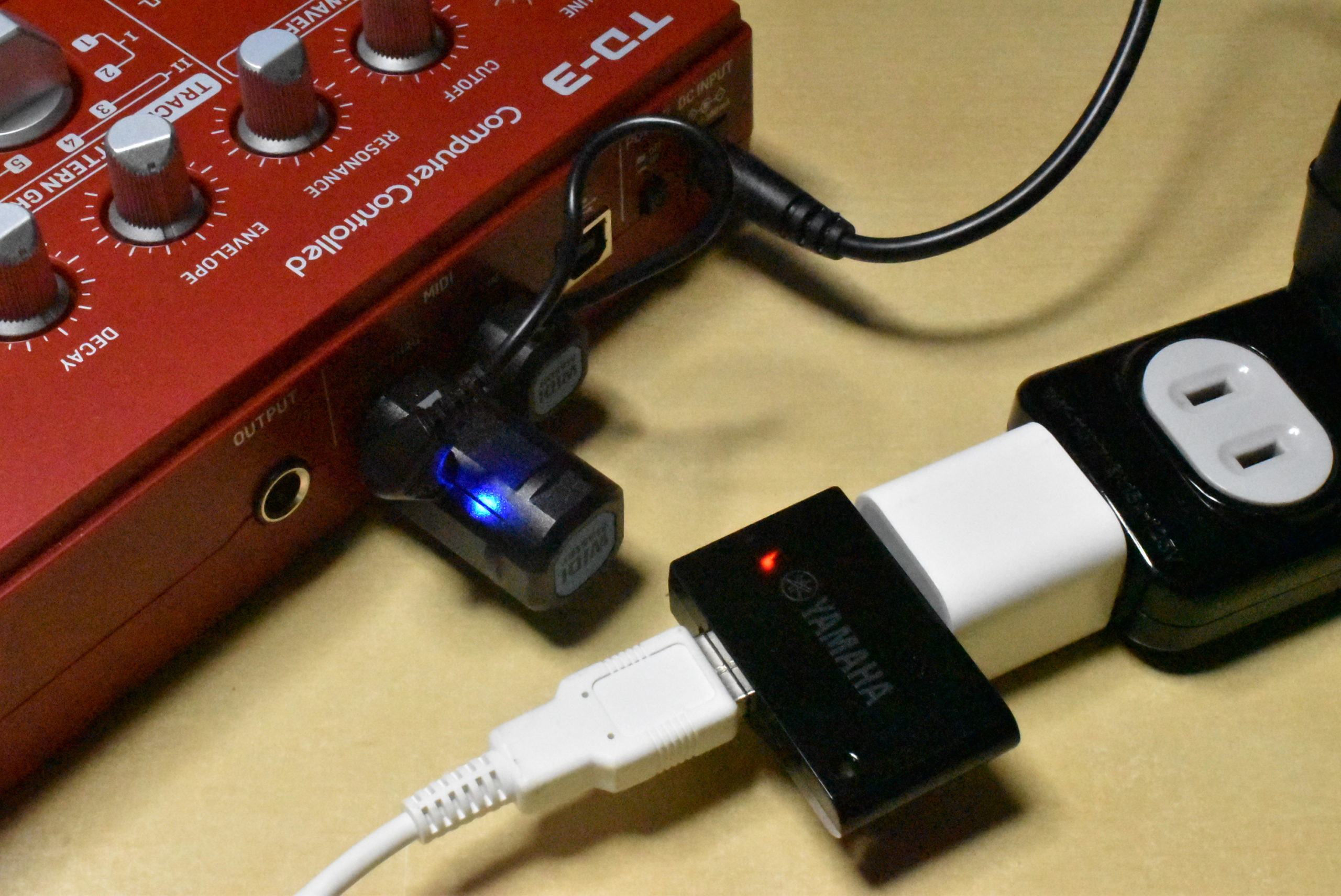 (CME says: Quicco Mi.1 white adapter is forced to the central role and only can connect to its sibling Mi.1 Cable black adapter. This is the way it is designed by the Quicco.) 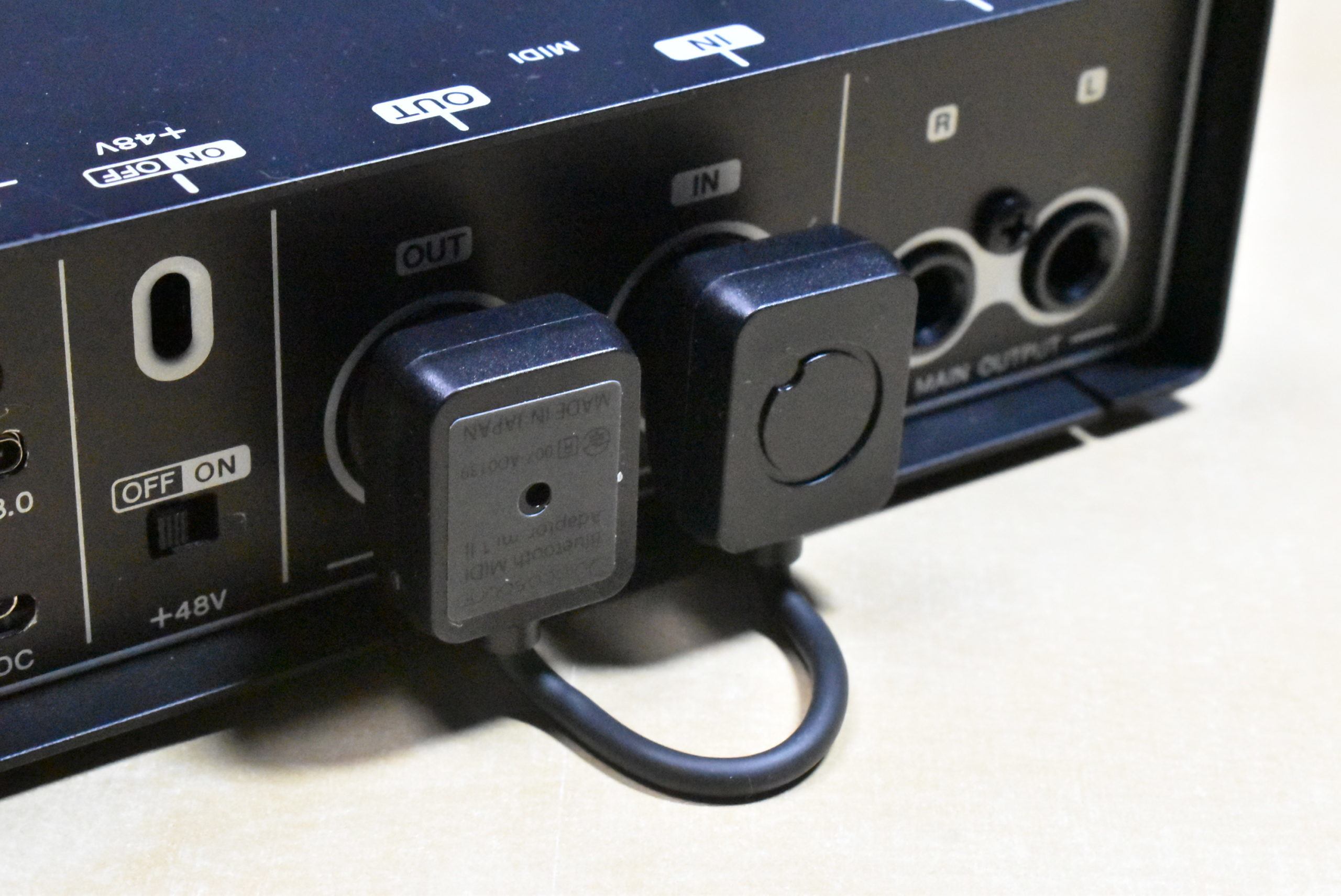 I also tried Roland's WM-1. It has been recently launched. I picked it up the other day. WIDI Master automatically connects in one shot. However, the WM-1 has Host and Remote settings. As well as a normal speed STANDARD mode and a high speed FAST mode.

The default state is Host STANDARD mode. I was able to connect in this state. But when I switched to another mode. The connection was cut off. Also, even if I put it back in again, it didn't connect well. So I'm thinking of investigating this area again.

Similarly, the WM-1D was able to connect automatically in STANDARD Host mode.

(CME says: Roland uses a private protocol in the other mentioned modes of WM-1/WM-1D. These do not follow the BLE MIDI standard. We will investigate how to cover the compatibility issue.) 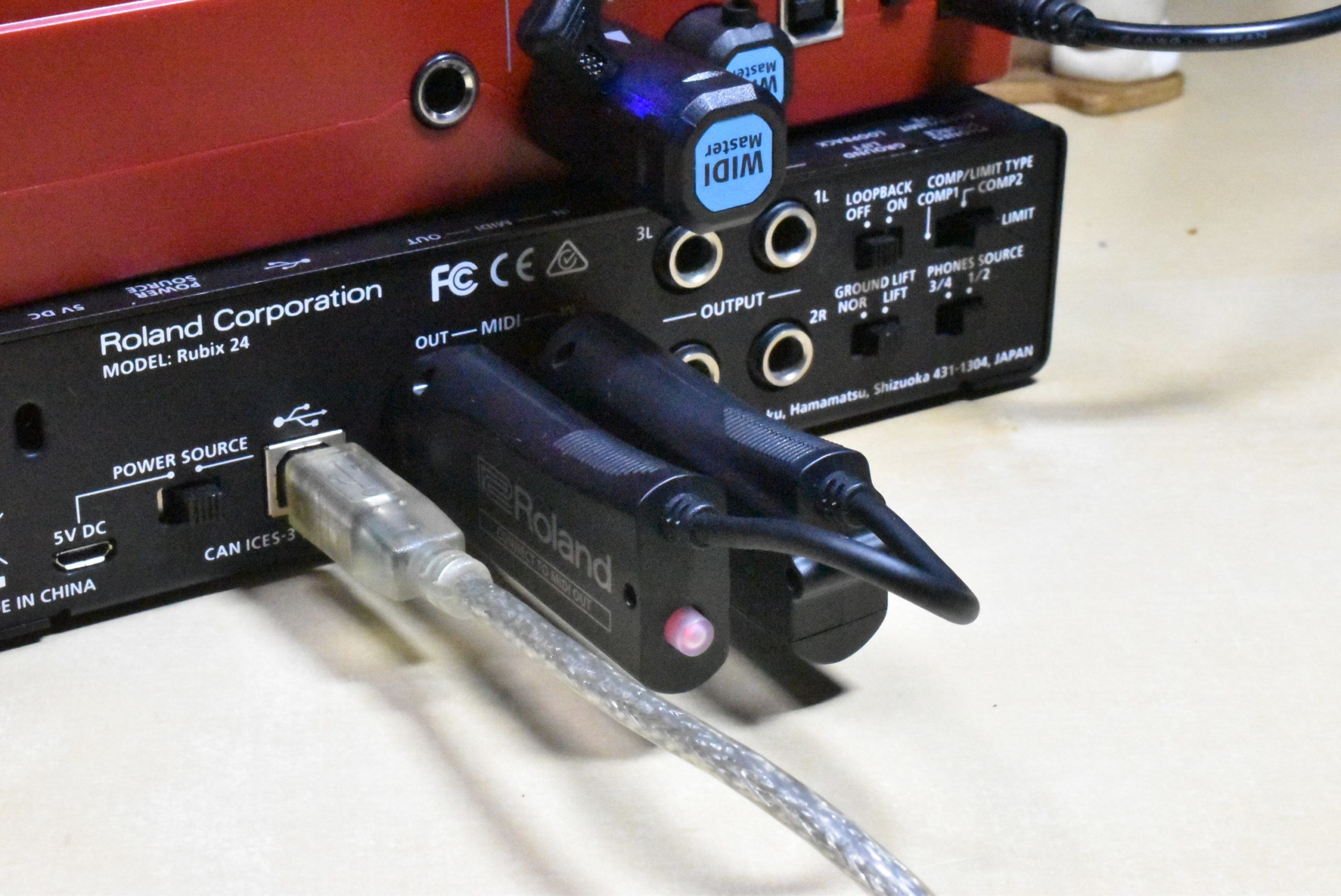 What about BLE-MIDI in iPad?

As you've seen so far, WIDI Master connects to BLE-MIDI devices easily and automatically. But what about the connection with iOS and PC?

First I tried it on the iPad. Well, unfortunately, this didn't work automatically. In the case of iOS, I needed to work through a BLE-MIDI compatible application.

However, you can connect by pairing from the BLE-MIDI compatible application side. Once the power is turned off, the connection on the iOS / iPad OS side are still interrupted. So it seems that this is not the only automatic reconnection.

(CME says: this is the way Apple forces you to manually connect when using Bluetooth MIDI. Automatic pairing will work when you bypass these limitation by using WIDI Uhost) 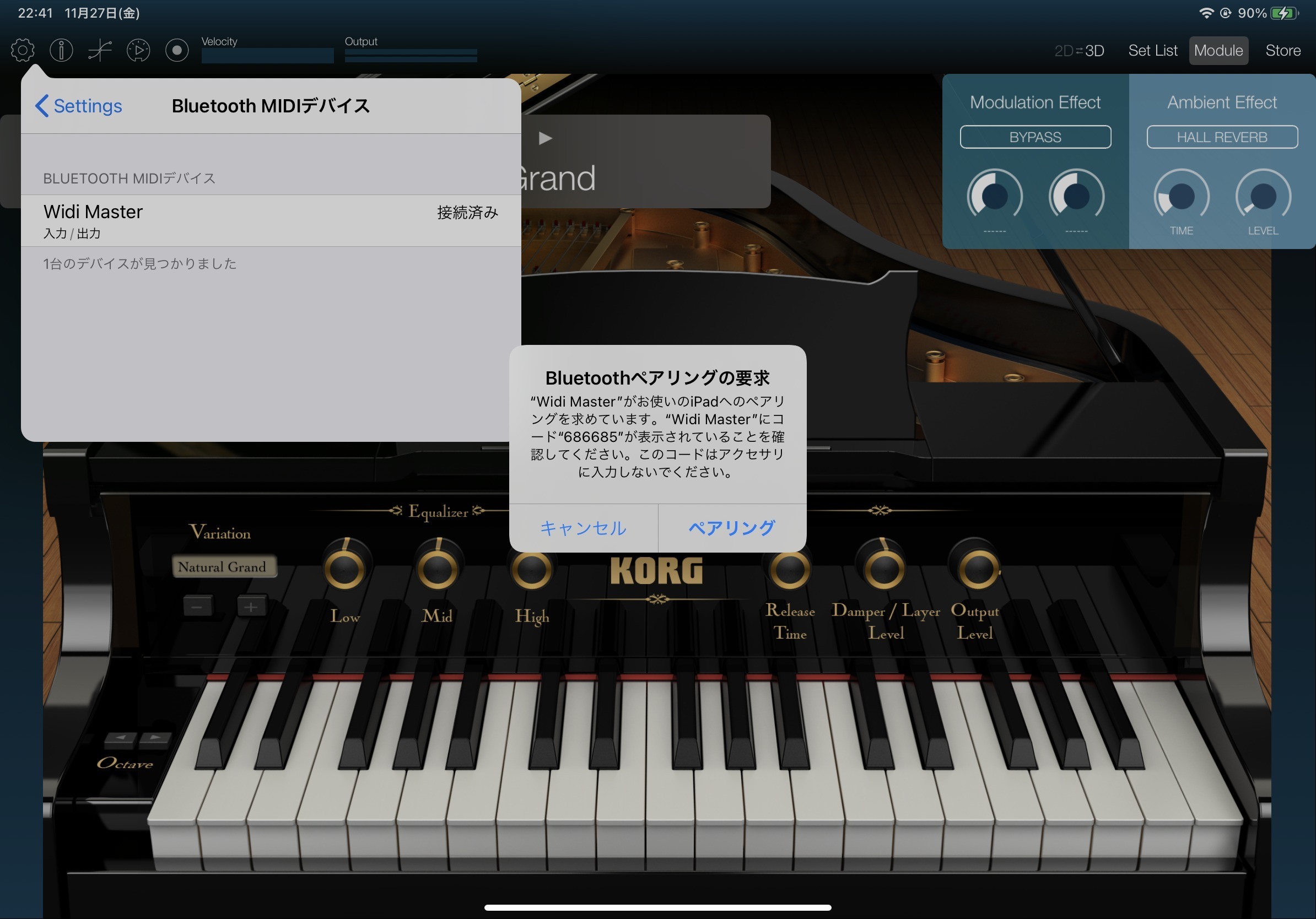 In the case of iOS, it was possible to use it by pairing through a BLE-MIDI compatible application

What about BLE-MIDI in MacOS?

Then what about the Mac? The other day, I bought and tested a Mac Mini with an M1 chip. If you start MIDI Studio with Audio MIDI Setup. And then click the Bluetooth button in the same procedure as connecting to a general BLE-MIDI device. This is the procedure to connect with WIDI Master. 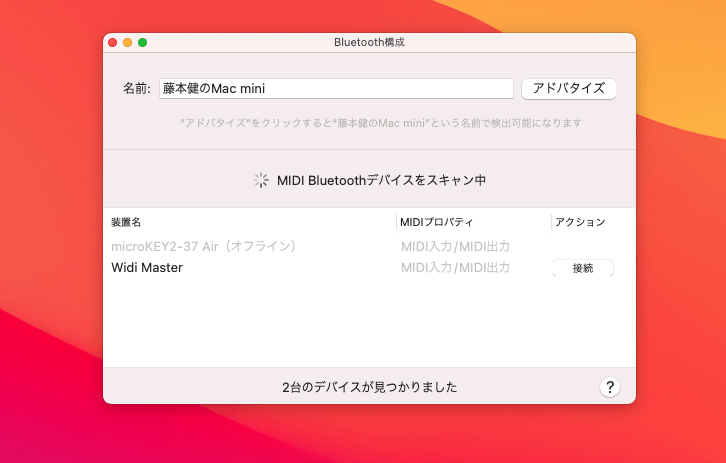 For Mac, you can connect using the Bluetooth function in MIDI Studio with Audio MIDI Setup.

What about your DAW?

I checked it with Digital Perfomer 10. This is a DAW that works using Rosetta. I confirm again that it works without problems. However, as with iOS, even if you turn off the power of JU-06 to which WIDI Master is connected. And then disconnect the Bluetooth connection. And turn it on again, it will not connect or pair automatically. This is also a macOS specification, isn't it?

(CME says: Yes. That is correct. We can do a lot, but not change the design of iOS and MacOS. What we can do is bypass these limitations with WIDI Uhost)

When I tried using it from Digital Perfomer 10, I was able to operate it without problems.

What about your Windows?

So what about Windows? As many of you may know, using BLE-MIDI on Windows requires some effort. Actually, Windows 10 has supported BLE-MIDI for 4 to 5 years, but it is not visible to general DAWs. It needs  a slightly different way of setting this up.

Yes, while a normal MIDI driver is compatible with MME, it cannot be used. As it supports BLE-MIDI in the form of UWP (Universal Windows Platform). Moreover, about a year ago, there was a bug on the Windows side regarding UWP MIDI. And there was a problem that it could not be used well.

Therefore, I thought it would be a little difficult to use on Windows, but in conclusion, it was very easy to use. First of all, the bug on the Windows side seems to have been resolved the other day. And the problem will be resolved by applying the latest OS update. 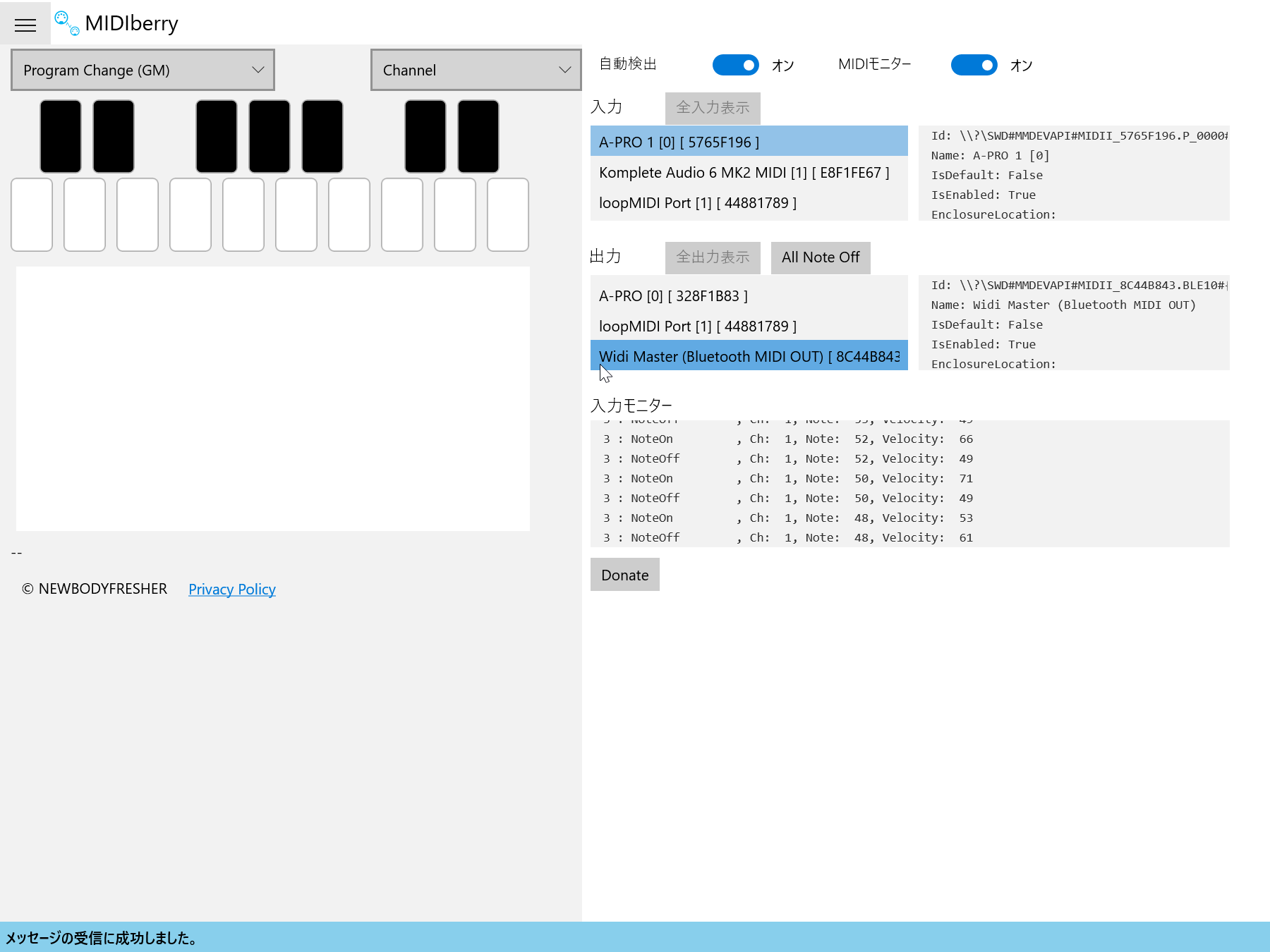 I was able to use WIDI Master from Windows using MIDIberry

Next I tried the freeware MIDIberry. This is software that supports UWP. It recognized WIDI Master and was able to use it immediately. MIDIberry is software that can send the signal that comes into MIDI IN of Windows to MIDI OUT. Also, you can use it to see the MIDI port of UWP.

As a test, when I turned off the power on the WIDI Master side and turned it on again, it automatically reconnected to Bluetooth. Furthermore, when I restarted Windows, it also automatically reconnects. And it can be used as a MIDI port as it is. So in a sense Windows may be more convenient when using it with MIDIberry.

Use MIDIberry M to use both MIDI IN and MIDI OUT

If you use Windows, it is necessary to install LoopMIDI separately in order to use it in the DAW. This Loop MIDI can be seen from your DAW. This way you can use it by sending the output here to WIDI Master via MIDIberry.

In the case of MIDIberry, data can be sent only in one direction. If you want to use it in both directions, it will be no longer a free tool. Fortunately there is MIDIberryM, so use this and Loop MIDI to make it possible

When I contacted the developer of MIDIberry, it seems that Cakewalk has supported UWP MIDI since the SONAR era about 3 years ago. This can be used by switching the Cakewalk setting from MME to UWP.…….

When I tried it, I was surprised that it was easy to use.

I've reported on CME's WIDI Master, but what do I think? It was easier to use than I had imagined and was very comfortable. Looking at the product information, WIDI Master is a device that supports Bluetooth 5, and the latency is as low as 3 msec.

In fact, I don't feel any latency when I use it, so it's also excellent.

This time I installed and used two WIDI Masters, but usually one may be enough. It's reasonably priced, so I do think you should try it.